Nuno Espirito Santo is likely to ring the changes for Wolverhampton Wanderers’ meeting with Liverpool – 48 hours after their 3-2 win over Manchester City – and Jonny Otto may be one player rested as a result. 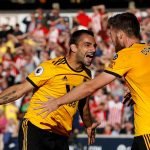 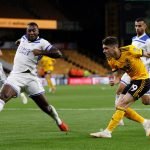 The 25-year-old underperformed in Wolves’ 2-1 win over Norwich City (December 21) and wasn’t at his best against Man City (December 27) either, eventually being substituted for Ruben Vinagre in the second-half.

Vinagre is a pacey alternative to Jonny and impressed from the bench on Friday night, so he could get the nod against Liverpool. The Reds have an abundance of pace in attack, so Nuno could opt for the young defender to cope with Mohamed Salah and Trent Alexander-Arnold.

It would be a big call, however. Vinagre has made 18 appearances in all competitions this season, but only seven of them have come in the Premier League. The 20-year-old has amassed a paltry 207 minutes of top-flight football and hasn’t started a league game since early-October.

Whether Nuno would make such a gamble against the runaway leaders remains to be seen, but Jonny hasn’t been at his best in the last week and may benefit from a rest.