With Wolves currently short on numbers, there is no doubt that they could do with another centre-back to ease some anxiety for Nuno Espirito Santo, though another one could be out the door.

According to the Press Association news agency, Ryan Bennett is being eyed by clubs in the Premier League, Championship and the SPL (via FourFourTwo), with the defender being somewhat of a forgotten figure during this campaign.

Even with a long injury to one of the club’s star assets in Willy Boly, Nuno has preferred to use the options of Romain Saiss and Leander Dendoncker, despite them both traditionally being central midfielders.

In fact, in spite of these injuries, the 29-year-old has only been able to muster 604 minutes in the Premier League, playing in 11 matches and starting just seven, and has been left out of the last two matchday squads in the league.

In recent weeks Max Kilman looks to have leapfrogged him in the pecking order, with him making the bench in recent weeks while Bennett has stayed sidelined.

Can we afford to see Bennett leave?

Definitely not, even with another CB 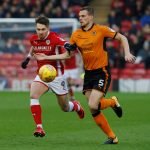 Yes he can leave if we buy another CB

He's not good enough, even if we get a CB

Even with Bennett’s first-team playing days potentially being limited at Molineux, surely the club cannot afford to lose another defender at this time of the season without one coming in. They have already lost Jesus Vallejo’s loan signing due to him not being up to standard, which would mean that they would be another defender down with a big European chase in the Premier League coming up as well as the Europa League knockouts.

Perhaps these rumours could signal that Wolves are on the verge of bringing another centre-back in, as the story isn’t particularly plausible if not. Bennett might not be quite up to speed with the manager’s long-term plans, but he is nevertheless an experienced squad member who you can rely on.

Last season he played in all but four Premier League games – so he knows what he is doing at this level.

Wolves must be wary that they are just a few injuries away from a bit of a crisis. The fact that they are still dependent on central midfielders in defence means that if Joao Moutinho or Ruben Neves were to get injured, then that wouldn’t only be a problem for the midfield set up, but the defence set up too.