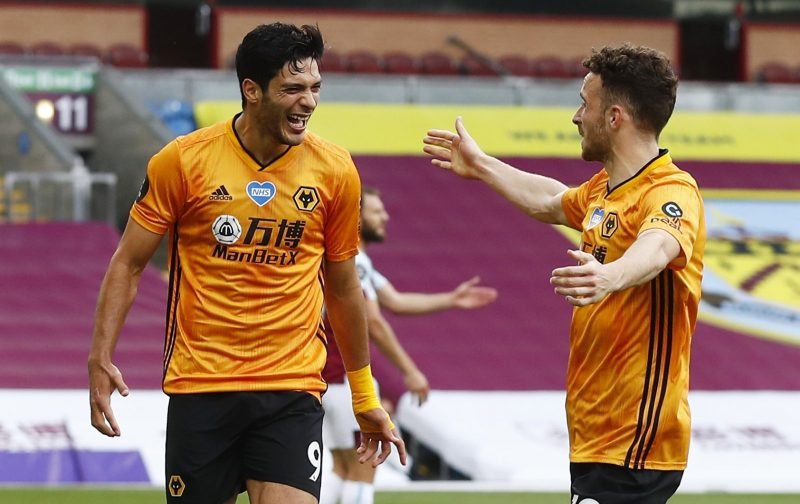 Wolves made it through to the Europa League Quarter finals after a tense, nervy but thrilling game against Olympiakos at Molineux on Thursday. It was a win against good quality opposition that will probably feel unlucky to lose, and one where the main praise will likely go to the goalkeeper and defence but will go down as a game to remember with the only sadness being that we weren’t able to be inside Molineux to share the kind of game that only European competition can bring.

Nuno went for a positive 433 formation with Traore and Podence supporting Jimenez in attack and Moutinho restored to midfield to replace the unlucky Dendoncker who had probably been the best player in the last game at Chelsea.

Wolves could easily have gone ahead in the first minute when the ball fell to Jimenez whose cross-shot went wide of the far post. But a bright start to the game brought its reward after 8 minutes. After the keeper had miscontrolled a back pass and in trying to recover he flattened Podence for a clear penalty that Jimenez calmly converted.

There was a blow for Wolves 15 minutes in when Jonny went off with a knee injury to be replaced by Vinagre. And the visitors were starting to be a threat and after a powerful run from their left back ended in a fierce shot brilliantly saved by Patricio. There were chances at both ends in the game now and Neves tested the keeper from 30 yards before Olympiakos appeared to have equalised. The impressive El Arabi got through on the right and his pull back was turned in by Camara via a Boly deflection. For once VAR favoured Wolves as El Habri was deemed a few millimetres offside from the original through ball. And the visitors came close again soon after when El Arabi’s cross just eluded Cisse unmarked on the far post. But Wolves were having their moments too and Jimenez shot over with a cheeky panenka effort from 20 yards.

The visitors made two changes at the break and their speedy new right winger Randelovic was testing Vinagre on the flank. Wolves went close when a Podence shot was tipped over, and then again when a Jota shot fell too quickly to Boly who wasn’t able to adjust his feet quickly enough to turn the ball into the gaping net. There was a clear chance to seal the game with ten minutes left when a misplaced backpass left Jota with the keeper to beat but the striker hesitated and the keeper saved at his feet. But Wolves were hanging on by a thread at the other end now and a dipping shot was narrowly over before a powerful header saw Patricio produce another world class save.

Patricio 9 – produced two stunning saves and had an outstanding game
Boly 8 – produced a number of decisive challenges as Wolves came under pressure
Coady 8 – showed what a quality defender he has become, standing up to a real test from the Greeks
Saiss 7 – Olympiakos got in behind him a few times in the first half but he played his part in a fine defensive display
Doherty 6 – on the back foot for much of the game as the visitors pressed for an equaliser
Neves 7 – hard working display with good covering work and a couple of decent shots
Moutinho 7 – justified his return to the team with a battling midfield performance
Jonny – went off with what looked like a nasty knee injury early on, and the impression was he will be out of action for a while
Traore 6 – not his night tonight and only occasionally got in behind the defence
Jimenez 9 – his best game for some time and his movement, hold up play and linking play was excellent
Podence 8 – a real livewire who won the penalty with his persistence and caused plenty of problems for his old teammates
Vinagre 6 -tested by the Greeks but stood his ground well

Dendoncker and Jota replaced Traore and Podence and Jota will rue missing a great chance to wrap the game up.

Not a fluent Wolves performance but a thrilling European game never the less that kept everyone on the edge of their seats throughout. Next up is a quarter final against a Seville side that impressively and quite comfortably knocked out Roma earlier on Thursday. That game is on Tuesday evening in Duisberg and will doubtless be another European night not to miss.