Wolverhampton Wanderers will be without 29-year-old against Sheff Utd, player is ‘suspended’

Wolverhampton Wanderers will be without Romain Saiss against Sheffield United over the weekend as the 29-year-old is ‘suspended’. He’s picked up five yellow cards in the Premier League and will serve a one-match ban as a result. 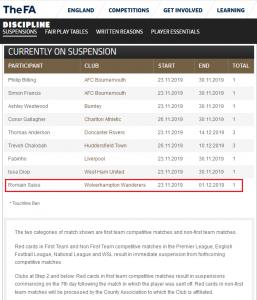 Saiss has been a regular this season, making 19 appearances in all competitions while racking up 1338 minutes of playing time. He’s operated in both defence & midfield and will be a loss on Sunday as a result.

Saiss will return against West Ham United (December 4), but his absence is bad timing as Nuno Espirito Santo is already without Willy Boly. Wolves aren’t blessed with a lot of cover at the back and may have to continue putting square pegs into round holes until they have a clean bill of health.

Wolves are still picking up results amid their injury crisis, but the Midlands outfit have kept just one clean sheet since early-October. Sunday’s meeting with the sixth-placed Blades will be a tough test.