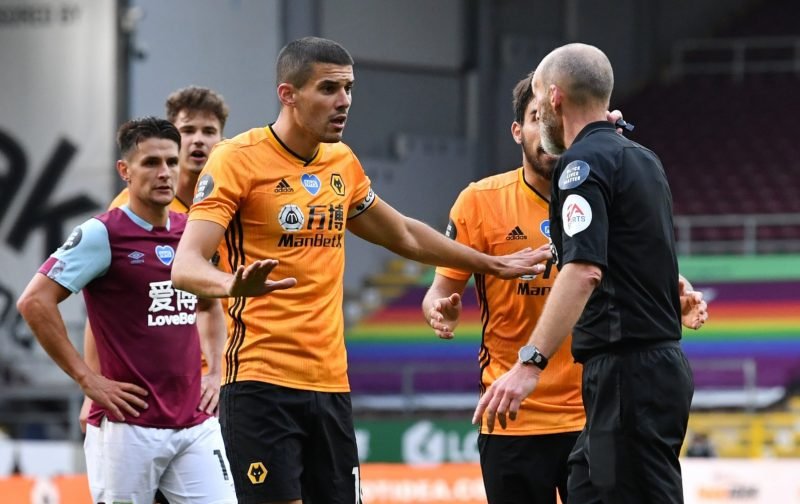 Many Wolverhampton Wanderers supporters have been left elated over reports by Football Insider, claiming ‘club legend’ Conor Coady has held talks over a new contract at Molineux.

It has been reported that Wolves have opened a line of communication with Coady and his representatives over extending his time in the West Midlands on a new, long-term deal, and that all parties are hopeful of reaching an agreement.

Coady is currently on a £15,000-per-week deal that makes the 27-year-old one of the lowest earners in Nuno Espirito Santo’s squad, but would be in line for a pay rise with club chiefs feeling the defender deserves to be rewarded for his excellent displays since helping to earn promotion to the Premier League.

The former England youth international has also attracted an array of attentive glares from rival sides ahead of the summer transfer window, leaving the Wolves hierarchy eager to lock Coady down beyond his current terms that run until 2023.

A large proportion of Wolves supporters reacting on social media would likewise be keen to see Coady put pen to paper on a new deal, having seen the 27-year-old play every minute on offer across the Premier League, Europa League and FA Cup this season – only sitting out the Carabao Cup.

His appearances have totalled 4,860 minutes of game time over 54 appearances heading into Sunday’s final day clash with Chelsea, which would mark Coady’s 233rd outing for Wolves across all competitions since joining the Molineux outfit in 2015.

One of the best signings we could make this window.

Give him what he wants, club legend already 👌

Give him and Nuno a blank check and let them put any number they want!

Lifetime contract, whatever he wants….done!!!! He needs to be with us till he retires!!!! 🧡🖤

News of Coady holding talks over a new contract after earning interest from rival sides ahead of the transfer market has seen some Wolves supporters argue that the conversations over a new deal are more down to his performances.

As well as being a relentless mainstay of Espirito Santo’s squad this term, Coady has proven his worth with an average 0.9 successful tackles from 1.3 attempts per 90 minutes in the Premier League, plus 0.7 interceptions, 3.1 clearances, 0.7 blocks, 0.9 aerial duels won from 1.5 contests and played 48.9 passes, per WhoScored data.

The lynch pin of the side. The best captain since Mike Bailey. https://t.co/LqCEE9K5Ks

It would be more a reward him for his service’s to the club than interest. He doesn’t seem the type to have his head turned. Massively invested in the club. Just rewards if he gets a new contract.

Coady’s displays still leave some Wolves supporters wanting more, however, with a handful of fans reacting by suggesting Espirito Santo should be looking to sign a ‘better defender’ rather than rewarding the Englishman with a new deal.

Some would also prefer to see other players offered new terms before Coady.

Get a better defender https://t.co/Q5NRC6sjEq

No open contract talks with Jimenez, traore, and neves https://t.co/SwlJsg3nAo