Jordan Graham has an uncertain future at Wolverhampton Wanderers after struggling for form and playing time at senior level. The 24-year-old hasn’t made a first-team appearance for Wolves since August 2017 and currently finds himself stuck in the u23s after his loan move at Lokomotiv Plovdiv was cancelled.

Graham joined Wolves from Aston Villa in 2015 and has gone on to make 17 appearances in all competitions, scoring and creating a respectable nine goals. He’s been out of favour for two-and-a-half years, however, and is currently behind Diogo Jota, Adama Traore and Pedro Neto in the pecking order.

Graham underwhelmed at Oxford (25 appearances, one goal, two assists), Fulham (three appearances) and Ipswich (six appearances) so it’s hard to see how he’d get back in the reckoning under Nuno Espirito Santo. The 24-year-old is out of contract next summer, but Wolves should try to cash in on Graham in January. 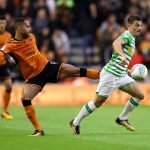 An early departure would suit all parties, as he risks becoming stagnant in the reserves.