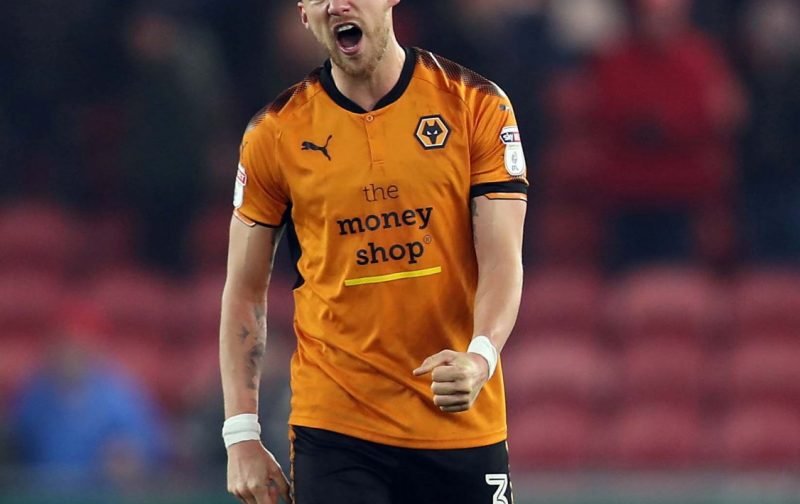 Late yesterday evening the unexpected but speculated departure of fullback Barry Douglas from Wolverhampton Wanderers to Leeds United was confirmed by both clubs.

Barry Douglas has completed a permanent move to @LUFC. All at Wolves would like to thank @barrydouglas03 for his efforts while at the club and wish him the best of luck for the future.

The 28-year-old left sided Scottish international moves on an officially undisclosed deal – but the fee has been suggested to be as little as £3million or as high as £5million on the rumour mill as we’ve covered previously.

He played a massive part for us in our Championship title-winning campaign of 2017/18 despite only arriving at this time last summer for a reported £1million.

Having scored five goals in 42 appearances, he also contributed 14 assists as his performances bagged him his maiden international cap for his country.

He’s been wished incredibly well by the club for the part he’s played in our success and he’s assured himself a place in our history. It’s no secret to say that a number of fans were very disappointed when this talk originally surfaced and that was certainly shown by reactions to the confirmation of his move.

Most unpopular transfer from Wolves I can remember. Would like to hear the thinking behind this. Our loss is Leeds gain!

I just want Barry back

Joke of a transfer but okay

As a Leeds fan even I'm surprised by this, absoulty mad that you've let him go and by all accounts very cheap. No cheap shots here but I'm buzzing for his arrival.

We’ll always have Bristol away ???? pic.twitter.com/hXb12PmGoR

Gutted out standing player for us
All the best @barrydouglas03

Does seem odd. It’s not often a club lets such a favourite leave for relatively little £. The wolves fans seem genuine in their disappointment so from my point of view = excellent signing

Thanks for being a key part of the best season I’ve had supporting Wolves in nigh on 40 years. Always guaranteed a warm welcome. Providing you don’t score! Good luck at Leeds.