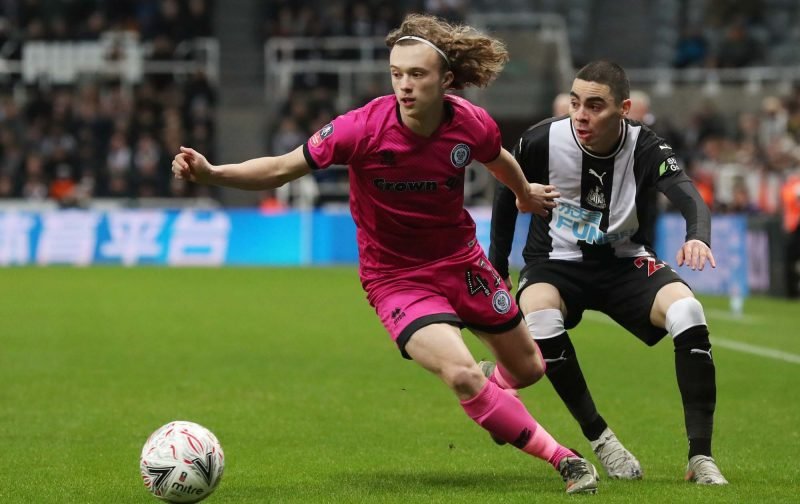 With Wolverhampton Wanderers being linked with Rochdale talent Luke Matheson in recent times, within the last hour the club have confirmed the capture of the 17-year-old defender on a reported £1million deal, and he has been instantly loaned back to Spotland so he can continue getting good game time as he continues his development.

With Wolves regularly now bolstering our Under 23 setup as we look to the future, the capture of Matheson should bode well as he’s impressing and getting good game time at Rochdale this season as he enjoys his proper breakthrough year.

Having caught the eye last season with four appearances in the EFL Trophy, and then three further showings at League One level, 2019/20 has saw his stock rise further and he now boasts a total of 24 starts, seven substitute showings with a return of two goals.

Fans may be aware of his name as the England Under 18 international scored against Manchester United back in September’s EFL Cup clash and having made his debut for Rochdale aged 15 years and 336 days, he’s in their record books as their youngest ever first team player.

“The system we play, it’s set up for him. He plays at right-back for Rochdale at the moment, but he’s a right wing-back in our eyes because of his energy and ability to continually sprint and recover. At 17, for a boy to have so much experience, be English and have such a strong mentality is fantastic and we think he’s everything we’re about. He’s playing so often at Rochdale, so we’re sending him back there on loan, to continue to get experience and that should hopefully give him more game time. Then he’ll come back to us for the start of pre-season in the summer. It’s great for all of us to get him in the building, we’re really excited and we think he’s going to be a top talent.”

Delighted to announce that I have signed for @wolves such a prestigious club with a phenomenal fan base! I can’t wait to get started! Proud to be part of the pack! 🐺🧡 pic.twitter.com/2SAVE0OjjF

Given the pedigree he appears to have for such a young age, fans were naturally delighted with his capture as it’s turned into a pretty good window for us all things considered.