“Fosun, We Know Nothing About Football” – Wolves Fans Will Love Jeff Shi’s Words 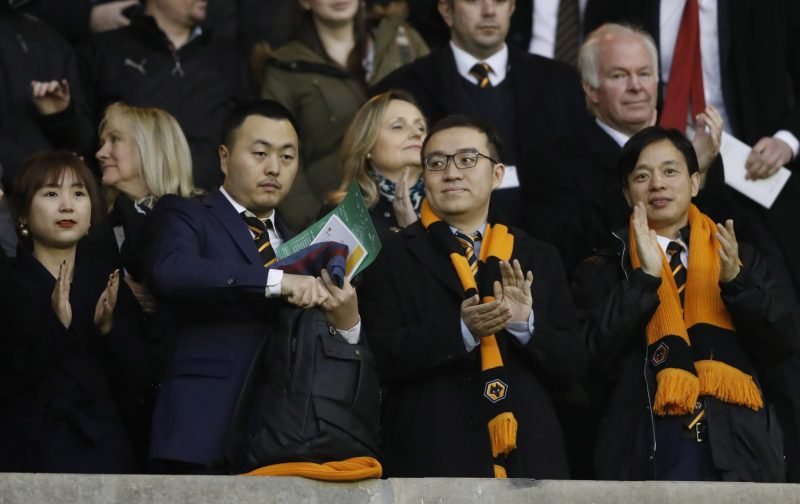 Wolverhampton Wanderers have enjoyed a dramatic turnaround in fortunes following our takeover by Fosun. Having stormed to the Championship title following the appointment of head coach Nuno Espirito Santo, we again showed our increased ambitions over the summer and our first year back in the Premier League has gone incredibly well.

Having secured a seventh place finish and the potential opportunity for European football next year, we also had a run to the Semi-Finals of the FA Cup.

With the curtain now drawn on our first year back, reflection on the year of 2018/19 will be incredibly positive.

Club chairman Jeff Shi was recently interviewed by CNBC and having claimed the ultimate aims is to be ‘one of the best clubs in the world’ he went on to talk about our ambitions, both on and off the pitch, and in a brilliant crack he claimed that Fosun knowing nothing about the game of football was actually an advantage.

“The most important thing here is ambition. Sometimes, when you are in the football industry for a long time you think, ‘OK, it’s very hard to get promoted, it’s very hard to break into the top six, they are too strong. You can see the superstars in their squad and staying in the Premier League is the most we can do. Our financial budget is not so strong compared with top six teams.’ This kind of thinking will limit your ambition. If you cannot think big then all you are trying is stay, stay, stay. At Fosun, we know nothing about football. Sometimes it’s an advantage because you know nothing.”

He went on to say.

“You are fresh to the industry so you can think differently and you have some very naive ambitions, maybe, at the beginning, ‘I want to do something big!’ That’s a big change to the club. In the past I think, ‘League One, not good. Championship, OK. And Premier League? Oh it’s fantastic. If we can stay for one, two, three years that’s good.’ No. We’ve changed the mindset. We get promoted, we want to stay but we want to do better in the future. In the future we want to be one of the best clubs in the world. If you have that kind of mindset, and everything you’re doing is different, then you’ll try to recruit the best people into the club and you want to do something world class. You want to behave and perform better than the others in the industry.”

Long may that continue!

Wolves Listen To The Fans & Become A Premier League First