Ruben Neves is walking the disciplinary tightrope ahead of Wolverhampton Wanderers’ meeting with Manchester City. The 22-year-old has four yellow cards in 18 Premier League appearances and could be handed an automatic one-match ban if he’s booked against City on Friday night. 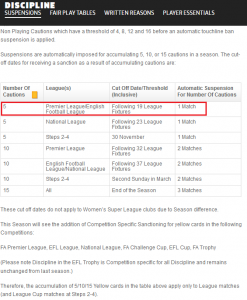 As per Transfermarkt, Neves’ first yellow of 2019/20 came on the opening day of the season. He was cautioned after an hour in Wolves’ 0-0 draw with Leicester City (August 11). His second came eight days later in the 51st minute of Wolves’ 1-1 draw with Manchester United (August 19).

As per FA rules, a player will only be banned for picking up five yellow cards if it’s by the 19th Premier League game. Wolves’ meeting with City is their 19th league outing, so Neves only needs to survive for another 90 minutes to avoid being banned for Wolves’ clash with Liverpool (December 29).