Arsenal recently sacked Unai Emery after a poor run of form and have Leicester’s City’s Brendan Rodgers & Nuno Espirito Santo on their list of potential replacements. Wolverhampton Wanderers are desperate to keep the 45-year-old, but Nuno is said to be open to the possibility of managing the Gunners.

According to 90 Min, Wolves are so anxious about losing their manager, they’re looking to fast-track contract talks. The Midlands outfit will hand Nuno a considerable payrise and more backing in the transfer market.

Are You Worried About Nuno's Future?

Not Yet, But In Time 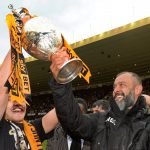 Under Nuno, the Midlands outfit won the Championship in 2018, finished seven in the Premier League in 2019 and could find themselves just one place outside of the top-four in 2020. They’ve also booked their place in the last-32 of the Europa League, so there’s plenty of reason for Nuno to stay.

That being said, the opportunity to manage a side of Arsenal’s calibre doesn’t come around every day. It would be a career highlight for Nuno, so time will tell if Wolves can convince him to stay.