Wolverhampton Wanderers welcomed already relegated Fulham to the Molineux on Saturday afternoon for our penultimate Premier League clash of the campaign.

Closing out the 2018/19 season on home soil in our first year back in the top flight, it’s been a great year for Wolves. Plenty of ups, a few downs, but three points at the weekend after Leander Dendoncker broke the deadline with 15 minutes remaining in the game all but secures our potential Europa League adventure and seventh place, then it’s all eyes to the FA Cup Final.

Statistics website Whoscored were very positive in their player ratings following the Fulham clash and they gave Man of the Match to Joao Moutinho for another inspired performance. 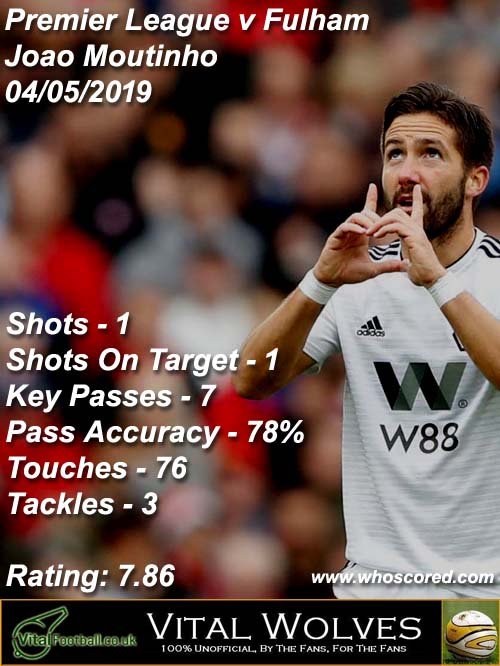 Quickly following in second spot was goalscorer Dendoncker with 7.79 and then completing the top five best performers in their system were Matt Doherty (7.71), Ryan Bennett (7.30) and Willy Boly (7.09). Jonny also received a plus score for his efforts on the day as well.

All eyes to Liverpool now as we bring the curtain down and a point guarantees Europe if Manchester City defeat Watford.